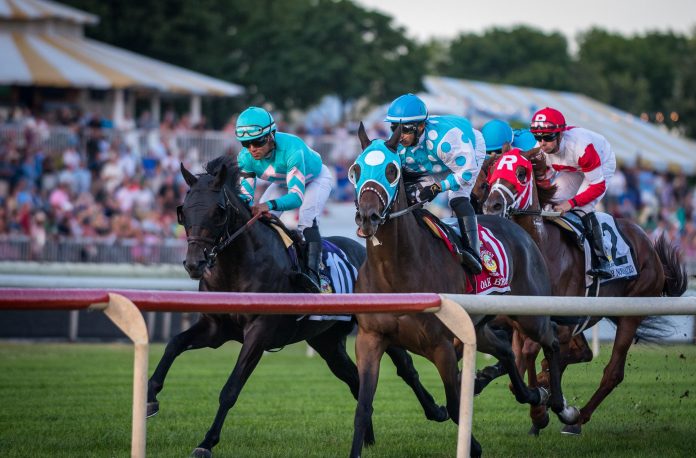 In the wake of a green light given by the state of Illinois for racing to resume, horsemen are renewing pressure on Arlington International Racecourse to get going with a summer meeting.

The Illinois Department of Agriculture’s announcement lifts COVID-19 pandemic restrictions in June, provided racing is conducted without fans in the stands.

Domenic DiCera, executive director of the Illinois Racing Board, said the conditions around resumption “necessitate changes to keep horse racing going in Illinois. The return of live horse racing in Illinois is welcomed by many hard-working men and woman that work and are committed to this industry.”

Hawthorne Race Course earlier said it has been working closely with the Department of Agriculture and its local officials on parameters for reopening and stands ready to resume its harness meeting, halted March 18, quickly after approval from the state.

Hawthorne officials did not respond to inquiries about a firm date for a return of live heats.

Arlington at a May 22 IRB meeting maintained it will not race without spectators, citing unique financial considerations. Arlington president Tony Petrillo said the track has had no indication when it might get a go-ahead for that.

The Illinois Thoroughbred Horsemen’s Association charged Arlington’s focus is on generating profits for its parent company, Churchill Downs Inc., rather than supporting the Illinois industry.

“Rather than race without spectators, and miss out on the prospect of selling cocktails at a steep markup to crowds at Arlington Million Day, Arlington instead is poised to forgo racing altogether,” the ITHA said in a statement. “Everybody in Illinois is sacrificing in this difficult time. Everybody, that is, except Arlington, which would just as soon take its ball and go home than do its part to help Illinois workers and taxpayers by continuing live racing while taking reasonable steps to mitigate against the spread of COVID-19.”

Petrillo told BloodHorse May 28 that Arlington’s cost structure “is twice Hawthorne’s and three times the cost of Standardbred racing. Of course we need the revenue.

“I still hold hope that if we get to Phase 4 (of Gov. J.B. Pritzker’s Illinois reopening plan) and we’re treated like movie theaters or like public parks, we can get going,” Petrillo added.

But he said the main stumbling block to setting a summer schedule is the lack of a contract between Arlington and the ITHA, which would permit the track to export its signal for simulcast wagering.

“We’ve negotiated in good faith,” Petrillo said. “But every time we think we have an agreement, they come back with changes. It’s not us that have a blockade on racing. It’s the ITHA.”

The ITHA had exactly the opposite spin.

“Arlington has tried to scapegoat the horsemen by saying that racing can’t start until we first agree to Arlington’s egregious contract terms,” the statement said.

Sticking points include Arlington’s insistence on a two-year contract and horsemen’s demands for a guaranteed purse structure. There are other, underlying issues of contention between the track and the horsemen as well.

“Hawthorne Race Course is preparing for spectator-free racing … We applaud Hawthorne for demonstrating leadership and taking the initiative during this extraordinarily challenging time. Arlington should follow Hawthorne’s lead,” the ITHA said.

Hawthorne has been stabling several hundred Thoroughbreds and housing their supporting humans since the beginning of the year even though it has not conducted Thoroughbred racing since January. The track is eager to see that population move to Arlington’s backstretch.

Petrillo said Arlington cannot open the backstretch until a contract is signed.