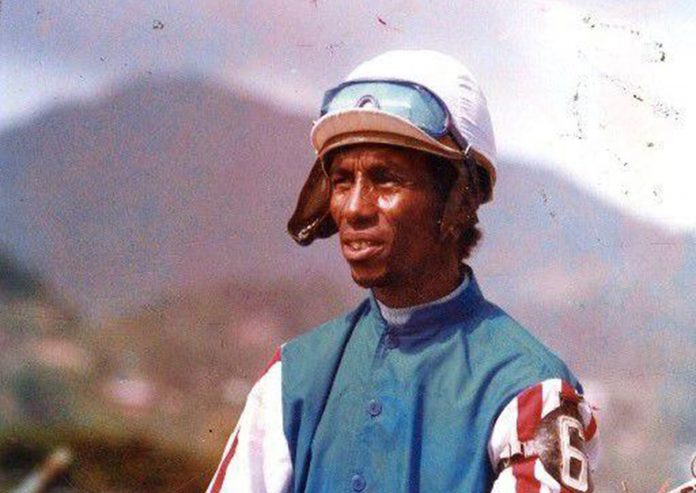 KINGSTON, Jamaica – Venice “Pappy” Richards is statistically the greatest jockey in southern Caribbean thoroughbred racing history, and the story of his death last week in Trinidad and Tobago is heartbreaking.

Barbadian Richards, after enduring months of fading health and failing eyesight, sadly passed away last Monday evening, destitute and alone, in a room at the Hummingbird stud farm stables near Santa Rosa Park in Arima. He was 76 years old.

How could such an icon, a legend of almost 60 years of tremendous contribution to Caribbean horse racing, suffer such an unbefitting departure from this life?

He was quiet but proud, and his high self-esteem, it seems, prevented him from advertising how tough things got for him.

But his health and physical struggles became highly visible in recent months, and surely more should have been done to assist him.

Close associates over his decades of involvement in the “Sport of Kings”, including iconic Trinidad and Tobago trainer and owner Joe Hadeed and Barbadian champion jockey and trainer Challenor Jones, expressed immense sorrow and surprise over the manner of his passing.

The ravages of diabetes and hypertension had left him thin, frail and partially blind, and meeting medical expenses had become even more challenging after his employment contract with the Arima Race Club (ARC) was not renewed in January. He had been hired in an ARC consultancy role in T&T in the past decade, after losing his gig with the Barbados Turf Club (BTC) at his native Garrison Savannah racetrack.

Richards scored over 1,400 career win, but in reality, that figure could well be over 1600 if you add scores of undocumented victories over several years as visiting rider to Martinique and Guyana. Only Jamaican legend Winston Griffiths (1,664 wins) has as many wins as Richards at English-speaking Caribbean racetracks.

He was never interested in becoming a racehorse trainer, as many successful retired jockeys had done. Richards was committed to giving back to the art of race-riding, and he tutored aspiring riders at jockeys’ schools in his native Barbados, as well as in Jamaica, and Trinidad and Tobago.

En route to jockeys’ championship titles nine times in Barbados and T&T, including 1982 when he was champion in both those countries, Pappy Richards was a multiple winner of all big races in Barbados.

In 1989 he completed the Triple Crown — the Guineas, Midsummer Classic, and Derby — with Bill Marshall’s Coo Bird. Richards scored six Derby wins in his career, four in Barbados, and two in T&T. Add to that five Barbados Guineas wins, four victories in the Midsummer Classic, and four triumphs in the Cockspur Gold Cup, now called the Sandy Lane Gold Cup.

His first Gold Cup win came in 1986 aboard Bentom before steering Sir David Seale’s Sandford Prince to victories in 1989, 1991, and 1992 when the seven-year-old champion posted a record time of one minute 49.20 seconds for the rich, nine-furlong event.

Richards won 85 races in a stint in the United States in the early 1970s, making appearances at New England’s Rockingham Park and Suffolk Downs and also at Lincoln Downs and Finger Lakes.

The Caribbean’s all-time most successful jockey, Patrick Husbands, with 3,370 North American wins and a bundle of accolades in Canadian racing, cites staying close to Pappy Richards, learning from him throughout his growing years, played a big part in making him who he is today.

Husbands admits he “looked up to Venice” when he was developing as a rider.

“Up to this day, I still think he is the best rider in the Caribbean,” says Husbands, a record eight-time winner of the Sovereign Award as Canada’s most outstanding jockey, and seven-time champion rider at Woodbine.

Richards’ great rival, Chally Jones, described him as a “fine gentleman, dedicated” and the “epitome” of what a jockey represents”.

At approximately 5’ 4” tall, Richards maintained a consistent riding weight of between 110 and 112 pounds throughout his career, a demonstration of commitment and discipline.

For his sweeping successes and service to sport, Richards earned from the Barbados Government a National Award in 1991 — the Silver Crown of Merit (SCM). He was also inducted into Barbados Racing Hall of Fame and also the racing Hall of Fame for Trinidad and Tobago.

T&T’s ARC has a benevolent fund in place to cover racing men who fall on hard times, but somehow Richards did not appear to have been a beneficiary of this scheme.

The despair over his sad passing extends even to the funeral plans, since the closure of the T&T ports due to the COVID-19 pandemic will bar family, friends, and well-wishers attending from his native Barbados.

PAST PERFORMANCES FOR SUNDAY, November 1, 2020 – ready and posted on Quickgallop.com