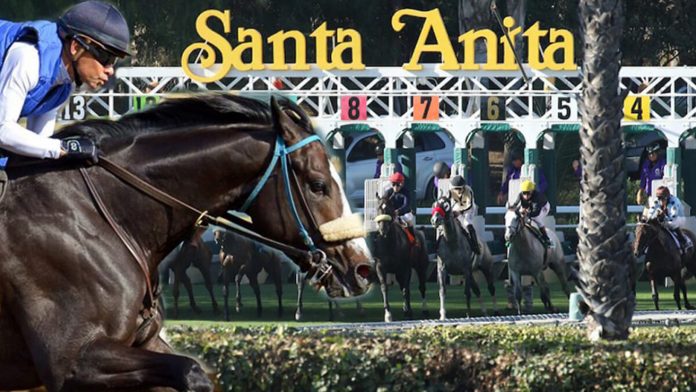 It’s the first week in June, a time when Thoroughbred racing usually finds out if there’s a Triple Crown champion to celebrate and anoint.

Until COVID-19 became a part of everyday life.

Yet even a pandemic could not derail the Triple Crown, though it surely led to some more stops along the way before the sport arrives at the first Saturday in September, when the Kentucky Derby Presented by Woodford Reserve (G1)  will be contested at Churchill Downs.

Before then, there will still be stakes for 3-year-olds that will be considered by some as “preps,” distributing points toward a starting spot in the Run for the Roses. Though that’s a totally new and, hopefully, one-year tag that has been placed on race such as the June 20 Belmont Stakes (G1) and July 18 TVG.com Haskell Invitational Stakes (G1) that have traditionally followed the Kentucky Derby.

The Santa Anita Park fixture will once again serve as a stepping stone to the Kentucky Derby, only this time it will be contested June 6, the date the Belmont Stakes was supposed to be run, and trainers will have three months, instead of four weeks, to prepare their horses for the Kentucky Derby.

Those differences aside, don’t think for a moment that winning the 2020 Santa Anita Derby will be any less of a thrill than it was in a previous year at the start of spring.

“It feels different but it feels the same,” said Sol Kumin, who owns a share of unbeaten Santa Anita Derby favourite Authentic. “When you think about the major Kentucky Derby preps in a traditional year, the big ones are the grade 1’s, the Florida Derby, Santa Anita Derby, and the Arkansas Derby. There’s something a little more special about winning one of those than the ones with a grade 2 next to them. The whole year is tuned upside down, but this is one of the races you want to win, in any year.”

Kumin owns Authentic through his Madaket Stables in a partnership with Starlight Racing and the newest member of the group, Spendthrift Farm. Spendthrift finalized a stallion deal for the son of Into Mischief  earlier this week, which also included securing racing rights from the grade 2 winner’s other original owners, SF Racing, Fred Hertrich III, John Fielding and Golconda Stables.

Authentic could provide Kumin with a third Santa Anita Derby victory in five years, joining Exaggerator  in 2016 and Triple Crown winner Justify  in 2018 and making hm part of an impressive achievement.

“It would be special to win it for a third time,” Kumin said.

Special does not begin to explain trainer Bob Baffert’s relationship with the Santa Anita Derby. The 67-year-old Hall of Fame and two-time Triple Crown winner has captured the stakes nine times and seems poised to hit double digits with a 4-5 morning-line favourite who is unbeaten in three starts and won his two stakes engagements in front-running fashion, by a combined 10 lengths.

Authentic was last seen winning the March 7 San Felipe Stakes (G2), before the pandemic forced the Santa Anita Derby to be moved from April 4 until Saturday. Since that 2 1/4-length decision over Honor A.P., who is also entered in Saturday’s 1 1/8-mile stakes, the son of the Mr. Greeley mare Flawless seems to have been living up to his dam’s name.

“He’s been doing really well,” Baffert said about the $350,000 purchase at the 2018 Keeneland September Yearling Sale from the Bridie Harrison consignment. “I backed off him a few weeks after the postponement and I think it helped him a little bit. He came back and jumped right back into the training like it was nothing. I think he’s pretty fit.”

While Baffert kept Authentic in California, he shipped Nadal and Charlatan to Oaklawn Park for the May 2  Arkansas Derby (G1) and they each captured their respective division of the nine-furlong stakes. Yet in the last month, Nadal suffered an injury that had one of his owners saying the 3-year-old will not race again. Charlatan, meanwhile, failed a preliminary drug test that could strip him of the Arkansas Derby victory and has Baffert wavering between the Belmont Stakes (G1) or the seven-furlong Claiborne Farm Woody Stephens Stakes (G1) for the 3-year-old’s next start.

All of which puts Authentic clearly in the exalted position of Baffert’s leading Triple Crown hopeful—a role he has played in Baffert’s mind for a while.

“I always felt he was the No. 1 seed in the barn, though it was hard to separate the three,” Baffert said. “He does it effortlessly. He comes back from running and he’s not tired. He just skims over the ground with that long stride. He would have been ready for the Kentucky Derby and I think by September he’ll be even better.”

While Authentic is already well-positioned for the Kentucky Derby with 60 qualifying points—he’s currently ninth on the leaderboard—the race could reshape the standings with 100-40-20-10 awarded to the top four finishers.

Authentic’s three wins have accounted for $331,200 in earnings, but far beyond that, he accounted for the third stallion deal for the core group of SF, Starlight, and Madaket out of just 20 colts purchased as yearlings in 2018, with all of them originally targeted for Baffert’s barn. With Eight Rings and Charlatan already having lucrative stud deals, this week’s hat trick reflects quite well indeed on the venture.

“We have a high-end barn and that’s where a guy has a chance to get out by winning big races and getting a stallion deal,” Baffert said. “Races like the Santa Anita Derby create value as a stallion and you have fun in the process. People love the action. Buying those horses was a brilliant idea that worked out great. There’s a lot of pressure on me, but it’s a good group and with (Spendthrift owner) B. Wayne Hughes coming in, he also loves the action and he’s a great businessman. He’s one of the smartest men in the game.”

Authentic will break from the outside post under Drayden Van Dyke, which should not be a major issue due to the colt’s keen early speed.

“I hope they get away clean, get into a nice rhythm and get the job done,” Baffert said.

Baffert will also send out Mike Pegram, Karl Watson and Paul Weitman’s Azul Coast, a 15-1 shot who was second by 7 3/4 lengths to Authentic in the Sham Stakes (G3) and has not raced since Feb. 15 when he took the El Camino Real Derby. Baffert had originally pencilled in the late running son of Super Saver  for the Belmont Stakes because of the 1 1/2-mile distance but scrapped those plans when the race that will now open the Triple Crown was cutback to 1 1/8 miles.

“There’s no race for ‘Azul’ so I put him in Saturday. I don’t want to ship him out. He’s a light horse,” Baffert said. “He might get a piece, you never know. Crazy things happen.”

A good second in the 1 1/16-mile San Felipe—also his last start—the added distance Saturday figures to help his case, though the small field and the prospect for moderate fractions weighs against trainer John Shirreffs’ runner.

“I think how the race unfolds in a small field will be the big thing. Authentic getting an easy lead again would be a concern,” said Shirreffs, best known for training the brilliant mare Zenyatta. “I think he’s ready for a big effort. He’s trained well for the race. We’ve done as much as we can with him. We’re fine with where he’s at.”

Honor A.P. is currently on the outside looking in with only 24 Kentucky Derby points and Shirreffs would be delighted to lock up a place Saturday in the 1 1/4-mile classic that should ideally suit the son of Honor Code .

“He looks like a mile-and-a-quarter horse,” Shirreffs said. “He has a really nice, long stride. He really doesn’t get in a hurry with his stride, so you think just watching him that distance is going to be his friend.”

Baffert’s starters are the only stakes winners in the field, though Peter Redekop BC’s Anneau d’Or (15-1) has come close on a few occasions. Second by a head in the TVG Breeders’ Cup Juvenile (G1) at 2, the son of Medaglia d’Oro  has finished no better than fifth in two starts at 3 for trainer Blaine Wright and will be hoping to rebound from a 9 1/2-length loss in the Arkansas Derby.

As a backdrop to Saturday’s card, it should be the day when Baffert eclipses the $300 million mark in North American career earnings, joining Todd Pletcher and Steve Asmussen as the lone trainers in that exclusive fraternity. He currently has $299,947,847 in earnings and those closest to Baffert, like longtime friend Pegram, predict he will probably joke about it, rather than brag about it.

“Knowing Bobby,” Pegram said, “When he reaches that mark, he’ll probably say to his wife, ‘Jill what happened to all the money?'”

PAST PERFORMANCES for Friday, October 23, 2020 posted on Quickgallop.com