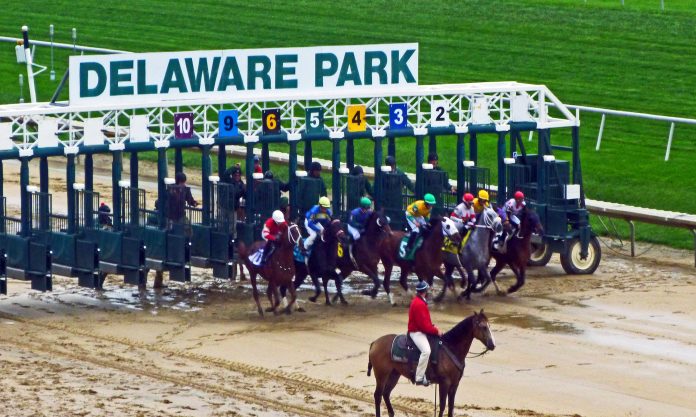 WILMINGTON, Del. (AP) — Area sports fans itching for live action got what they wanted this week.

Delaware Park opened its 83rd season of racing and the thoroughbreds galloping around the Stanton oval were a welcome sight.

Dick Strohl of Newark had been able to get out for some walks in Newark, where he lives, and some recent crabbing excursions to Cape Henlopen State Park down in Lewes.

But he treasured the chance to stand along the fence in the picnic grove in cloudy, mild weather as the first race was about to begin on the afternoon of June 17.

On this day for Strohl, just watching won out over wagering, which could be done outside at betting windows or computer terminals, or inside the clubhouse.

“A lot of people have dealt with change the last three months,” said jockey Trevor McCarthy, “and everybody’s just kind of happy to be back and we’ll do whatever it takes to be back.”

The coronavirus pandemic led to the cancellation of the spring high school sports season. College athletics were halted for good in mid-March. Other First State spring staples, such as Wilmington Blue Rocks minor-league baseball and the NASCAR race at Dover International Speedway, have also been absent.

Some youth sports were able to kick off this week, including the Delaware Baseball Group college and high school leagues.

But June 17’s 10-race card, which featured the $100,000 Obeah Stakes for fillies and mares 3 years old and up, was a sign of sports normalcy, despite the abundant face masks. Longshot Lucky Move won an upset victory with Roberto Rosado aboard.

The Obeah Stakes was the first career stakes victory for the New York-bred conditioned by Juan Carlos Guerrero. She raised her career record to 5 wins from 27 starts with earnings of $264,573.

“It’s a little nerve-wracking, but we’re super excited and I think you can tell by the reaction of our fans here they’re excited as well and they’re just happy to be out,” said Kevin DeLucia, Delaware Park’s chief financial officer and senior vice president.

Racing was supposed to begin May 27 with 85 racing days through Oct. 31 before the start was pushed back because of COVID-19 limitations.

“It felt like we were on lockdown for several months,” Morris said, “so, yeah, it feels good to be outside again. This is my first time here actually.”

The races marked the first sporting event Oszkowski had attended since his College of New Jersey baseball season ended prematurely in March after six games.

“It’s nice to go somewhere where everyone’s having fun,” said Oszkowski, whose amusement included hitting the daily double in the first two races. “There hasn’t been a lot of fun outside in a while.”

The Delaware Park meet will now cover 65 days through Oct. 17, with racing on Mondays, Wednesdays and Saturdays. There will also be racing on Thursdays starting July 16 through Oct. 1. Daily post time is 1:15 p.m.

Delaware Park had consulted with state officials for the beginning of racing under its phase two protocols, which allowed fans but with stipulations. The track instituted a long list of health and safety protocols aimed at preventing potential coronavirus spread.

Everyone entering the clubhouse had their body temperature taken with a touchless, handheld thermometer or thermal imaging device. Anyone with a temperature of 99.5 degrees or higher was not permitted inside.

Those entering were also asked if they had COVID-19 symptoms or been in close contact with anyone in the previous 14 days who had tested positive. Anyone with symptoms had to vacate the grounds.

“It’s definitely an adjustment,” DeLucia said, “but everyone I’ve talked to today is very excited to just be back. They love horse racing and they’re glad to be back … I’d say this is a really good opening day.”

“We’ll regroup (Thursday) and see what worked, what didn’t work,” he added, “and make adjustments for this Saturday.”

Safety procedures were also in place for the jockeys, such as limiting entrance to the paddock and winner’s circle.

McCarthy returned to racing when Laurel race track south of Baltimore opened May 30 without fans.

“We’re very fortunate that we’re back racing,” McCarthy said. “This is something that a lot of jockeys love to do. They love to be part of the races and to have everybody out here today, it’s a big plus.

“We have a great crowd so it’s nice to see a crowd. We’ve been down at Laurel racing for the last three weeks and we haven’t had a crowd. So it’s nice to have so many people out, betting, cheering us on, everybody just enjoying themselves. So we’re really delighted to be back racing.”

Overall attendance, both inside and outside, was also capped at 3,000. The grandstand seating area was closed.

The track had been opened since June 4 for simulcasting.

That was another reason to savor the reappearance of racing, though it certainly added an air of uncertainty.

“It’s been a tough go,” he said, “but, man, it feels good today to be here and back feeling like we’re getting a little more normal.”