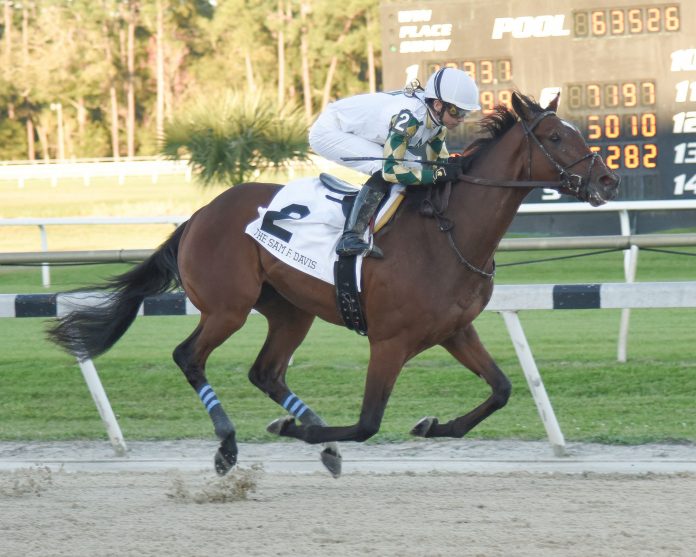 Last month, Sole Volante captured the Sam F. Davis Stakes (G3) at Tampa Bay Downs with a closing rush to defeat the favored Independence Hall. With that move forward in his belt, the son of Karakontie will now attempt the next step in the Grade 2, $400,000 Tampa Bay Derby this Saturday. But he did not scare anyone off.

A crowded field of 12 entered this 2020 Kentucky Derby prep, including Mucho Macho Man Stakes winner Chance It, maiden-winner Spa City and the Todd Pletcher trio of Market Analysis, Texas Swing and Unrighteous. It all gives Sole Volante backers plenty to think about.

The Tampa Bay Derby is carded as Race 11 on with a post time of 5:32 ET. Here’s a closer look at the field with the morning line:

1. Texas Swing, 12-1 (Curlin – Todd Pletcher/Javier Castellano – 2: 1-0-0): If nothing else, the pedigree for this Pletcher-trained colt is a beautiful one for longer distances. In addition to Curlin, his dam Derby Eve is a half-sister to 2008 Travers Stakes (G1) winner Colonel John. It is no wonder Texas Swing ran evenly in his career debut when attempting a six-furlong sprint, only finishing a mild fourth. He improved on the stretch out in a local two-turn route, winning by 1 1/4 lengths. He did not run fast on the TimeformUS scale, though, only earning a 102. Despite the low figure, a move forward is possible. Use underneath.

2. Spa City, 10-1 (Street Sense – Kiaran McLaughlin/Daniel Centeno – 3: 1-1-0): After two Gulfstream Park losses at shorter distances, Spa City stepped up to the plate in his third start. He broke his maiden in a nine-furlong race, winning by one length over a green Unrighteous after a pressing trip. Telephone Talker finished 15 3/4 lengths behind Spa City in third. But will he still run the same race cutting back to 1 1/16 miles? Another concern is whether Spa City gets caught in traffic from this post, especially with Relentless Dancer probable to break for the lead. Should he break well and secure a good position, the talent is there. Win contender.

3. Relentless Dancer, 12-1 (Midshipman – Michael Maker/Antonio Gallardo – 4: 2-0-0): His Holy Bull Stakes (G3) effort wasn’t terrible. He pressed a talented pacesetter in Ete Indien and failed to handle the heat as Tiz the Law came into the picture. Relentless Dancer faded to fourth, a whopping 18 ¾ lengths behind Tiz the Law. Despite his commendable effort, it is still difficult to back a horse who lost by such a margin. He likely will find a home cutting back in distance. Toss.

4. Chance It, 5/2 (Currency Swap – Saffie Joseph Jr./Paco Lopez – 6: 4-2-0): His hard-fought Mucho Macho Man Stakes is impressive to watch at first, as he moved through the rail and initially got pinned on the turn. But he fought back and outkicked As Seen On Tv once that horse began to drift out. The concern is that As Seen On Tv finished a distant third last Saturday in the Fountain of Youth Stakes (G2), 8 3/4 lengths behind the flashy Ete Indien. But the third-place Sole Volante did return to win the Sam F. Davis locally, albeit with a generous pace setup. For what it is worth, Chance It is training like a horse feeling great. In particular, watch his sharp Feb. 17 work in company with Coach Temple and Flora Fantasy. Win contender.

5. Market Analysis, 8-1 (Honor Code – Todd Pletcher/John Velazquez – 1: 1-0-0): This Pletcher colt came into his career debut at Gulfstream hyped off some impressive workouts, and he backed up the breezes with a 3/4-length win over Attachment Rate with a 103 TimeformUS Speed Figure. The runner-up went on to break his maiden in his next start, also with a 103. Also, the sixth-place Unconquered Lea broke his maiden over turf over Express Pharoah, who had run fifth in the race. But the third-place Precise Dancer flopped next time, finishing a dismal eighth. Market Analysis continues to work well, and his pedigree says stretching out will suit him. Watch his price, though, as he looks like the most talented Pletcher runner of the barn’s trio here. Win contender.

6. Mo Mosa, 30-1 (Uncle Mo – Michael Maker/Pablo Morales – 3: 1-1-1): Based on his three starts, he is hard to endorse. Mo Mosa’s lone win came at Turfway Park on Feb. 13, spurting away by 5 3/4 lengths after setting the pace. But this marks Mo Mosa’s first dirt start, and it comes against hungry Kentucky Derby candidates. California Chrome fans will recognize owner Perry Martin, half of his original partnership. But that alone isn’t a sign Mo Mosa can switch from synthetic to dirt in Grade 2 company and pull off the upset. Toss.

7. Sole Volante, 2-1 (Karakontie – Patrick Biancone/Florent Geroux – 4: 3-0-1): Given his Sam F. Davis victory over the well-hyped Independence Hall, it’s tough to dismiss Sole Volante as a contender. But this closer enjoyed a nice pace setup thanks to a speed duel between Premier Star and Chapalu. Remember that one start before, he failed to catch Chance It and As Seen On Tv in the Mucho Macho Man Stakes at Gulfstream. In this spot, Sole Volante might need another contested pace to defeat Chance It, let alone the newer faces. He could win, but accepting a low price is a bad idea. Use underneath.

8. Letmeno, 12-1 (Twirling Candy – Ian Wilkes/Chris Landeros – 4: 1-1-1): In his return to the races after a closing fourth in the Iroquois Stakes (G3) last fall, this colt finished third by five lengths in a local allowance optional claimer won by the Gouverneur Morris. That winner is another hyped Pletcher runner, but the jury is out on whether he is a major player on the Derby trail. As Dennis’ Moment evidenced in the Fountain of Youth last weekend, the Iroquois proved a negative race overall, too. Toss.

9. Unrighteous, 20-1 (Violence – Todd Pletcher/Joe Bravo – 2: 0-1-0): From a value standpoint, this is an interesting colt. Yes, he is still a maiden. Would the experienced Pletcher enter this colt if he didn’t think much of him? Also, he only lost to Spa City by one length at Gulfstream. Unrighteous ran awkwardly in the stretch, but he improved several lengths off his sprint career debut by posting a 104 on the TimeformUS scale, which is mildly competitive in this spot. Keep in mind that Gulfstream only ran one nine-furlong dirt race that day and no other two-turn dirt races. The figure was likely a difficult one to make. He could move forward. Live longshot.

10. Bye Bye Melvin, 20-1 (Uncle Mo – Graham Motion/Julien Leparoux – 5: 2-0-1): Motion is a respected trainer who knows how to win the Kentucky Derby. But this Uncle Mo’s only dirt start resulted in a mild third-place finish in a Keeneland maiden race last October. He lost by 5 1/4 lengths to Liam’s Legend, who finished a dismal 11th in the UAE Two Thousand Guineas last month. Toss.

11. King Guillermo, 15-1 (Uncle Mo – Juan Carlos Avila/Samy Camacho – 3: 1-0-1): His maiden win came last November at Gulfstream, when he set the pace and won by 6 1/4 lengths on turf. Later in the month, he then finished third to Sole Volante in the Pulpit Stakes on turf after chasing a fast pace and taking the lead momentarily before the winner flew by. Without dirt wins, he is tough to endorse. Toss.

12. Tons of Gold, 30-1 (Tonalist – Alexis Delgado/Angel Suarez – 8: 0-2-2): Here is another maiden. This Tonalist colt has lost eight times, with his most recent start resulting in a nine-length defeat to Gotham Stakes (G3) contender Attachment Rate at Gulfstream. He also drew the outside post and does not own the speed to clear. Derby fever is real. Toss.

Conclusion: This is a difficult race to narrow to a single win pick. But given Sole Volante is not proven in a slower pace scenario on dirt, he is a play-against.