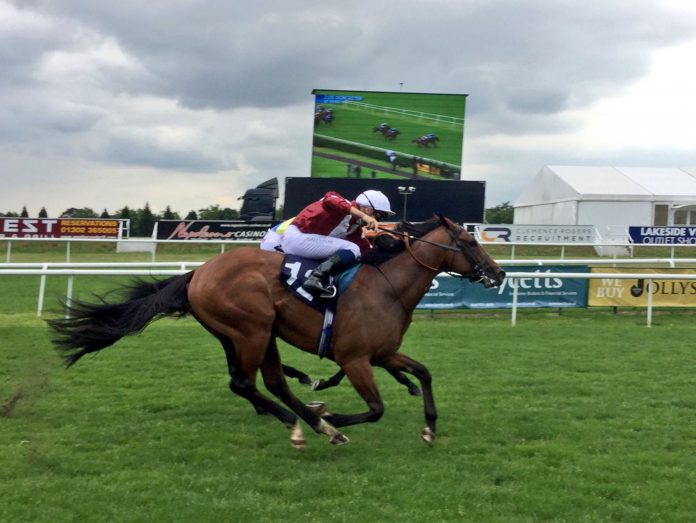 LONDON, United Kingdom (AFP) – Kevin Stott was turned down as a teenager by Tottenham Hotspur but any disappointment he may have still felt was washed away with a double on the biggest racing stage of all at Royal Ascot on Saturday.

The Danish jockey denied the two biggest names in the sport — Ryan Moore and Frankie Dettori — in winning the Group One Diamond Jubilee Stakes on Hello Youmzain.

Stott burst into tears as the achievement sank in but still recovered his composure to then add the prestigious handicap, the Wokingham Stakes, half an hour later on Hey Jonesy for the same trainer, Kevin Ryan.

Stott has Ryan to thank for regaining the ride on Hello Youmzain having been jocked off when he won a Group One last season.

“Getting jocked off Hello Youmzain after winning two Group Twos on him -– it obviously happens in racing quite a bit,” said Stott, who turns 26 in July.

“It hurt, but it was the owner’s decision. Sometimes that happens, but I was very fortunate to get back on him.

“The owners said to Kevin he could choose the jockeys and he put me back.

“I am so delighted to have my first Royal Ascot winner and then to have another one.”

Stott has not been able to see his family due to the coronavirus pandemic with him in England while they remained in Denmark.

“It is very emotional,” said Stott. “It means so much, and to my family at home in Denmark as well watching it.

“They aren’t here, I can’t fly out to see them, they can’t fly over here –- it means a lot that they are watching at home.

“I’m standing here with two Royal Ascot winners, things that you could never dream of. My first Group One as well.”

His English father Ken led a widely-travelled life as a jockey riding in Scandinavia, India and Africa before settling down in Denmark with his Danish wife.

Stott’s two brothers are also in racing, one a trainer and the other also a jockey.

However, his father had other ideas for him when he said he wanted to be a jockey — Spurs having turned him down following a two-week trial aged 14.

“I said to Dad when I was 16 that I wanted to ride horses, and within a week he had flown me over here and dropped me off at Kevin Ryan’s yard, and I have been there ever since really,” he said.

As for missing out on a football career the Manchester United fan does not care a jot.

“I am happy Spurs told me I was not tall enough!”